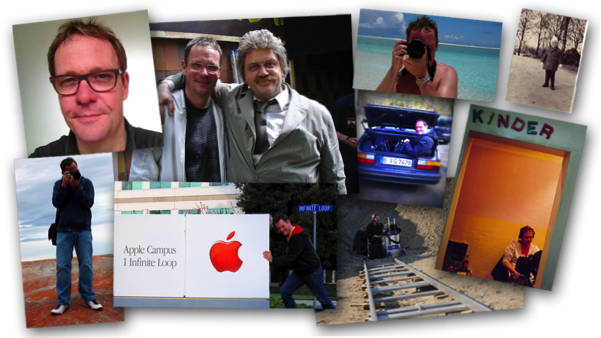 As an independent Production Sound Mixer I am working with my own equipment for German and international film and TV productions. More info is available at IMDb and Crew United.

I have also worked in part time as an Apple Consultant and Mac Supporter for many years. Since 2004 I am a registered Apple Developer and try to assist others in designing high quality apps and web services. I launched Geek Out in 2010.

• 1978-1979 Internship at the Advertising Agency B+M in Dortmund, Germany
• 1979-1984 Working as a freelance photographer in advertising
• 1981-1990 Studies in Photography and Film Design at FH Dortmund
• 1981-1989 working as Sound Mixer for Documentary productions
• 1981-1992 cooperation on projects in Art House movie theaters
• 1984-1996 Boom Operator for various film and TV productions
• 1989-1999 Side business as a Stills Photographer
• Since 1996 Production Sound Mixer in self-employment
• Since 2002 Member at the Society for German Sound Engineers (Verband Deutscher Tonmeister, VDT))
• Since 2009 Member of the Audio Engineering Society (AES)

Experience in Apple Consulting and Development

• 2003-2008 Side business as Apple Consultant and Mac Supporter
• Since 2004 Registered Apple Developer
• Since 2006 Cooperation in various Web-, Mac-, and iOS projects
• Since 2010 Publisher of the popular Mac & iOS blog Geek Out